We Created a New Extension

We want to make sure new functionality and improvements are added to the extension. However, our primary goal is making sure your pipelines and releases continue to function as expected by maintaining backward compatibility. As more changes were added however, we were approaching the extension size limit. In addition, following the need to start utilizing JFrog CLI v2, which includes breaking changes compared to v1, it seemed like the right time to create a new extension, that can run together with the old one, and allow you to gradually migrate when the time is right for you.

What's changed in the new extension?

Still missing in the new extension

To help you migrate your tasks from the old Artifactory Extension to the new JFrog Extension, we listed the old vs. new tasks names for you.

The JFrog Extension requires a licensed instance of Artifactory.

The extension is an open-source project on GitHub which you can freely browse and fork.

The Artifactory extension for Azure DevOps is available in the Visual Studio Marketplace.

To install the Artifactory extension, execute the following steps:

To run the Artifactory tasks, the build agents use three tools:

The tools can be installed on the build agents using one of the following methods.

If the build agent has access to the internet, JFrog CLI and the Maven Extractor are downloaded and installed automatically on the agent the first time they are required.

If your agent has no internet access, you can configure the pipeline to download JFrog CLI and the Maven Extractor from an Artifactory instance, which is configured to proxy the download repositories.

To install JFrog CLI on an agent with no internet access:

In versions prior to 1.8.2, the JFrog CLI manual installation path is: $(Agent.WorkFolder)/_jfrog/current/

When triggering the Artifactory Maven task, JFrog CLI automatically downloads the Maven Extractor jar to the build agent the first time it's required. However, if your build agent does not have access to the internet, the build will fail when attempting to download the file. You'll therefore need to download and install it manually.

To install the Maven Extractor jar on an agent with no internet access:

In plugin versions prior to 1.8.2, Maven Extractor's manual installation path is: $(Agent.WorkFolder)/_jfrog/.jfrog/dependencies/maven/2.13.13

When triggering the Artifactory Gradle task, JFrog CLI automatically downloads the Gradle Extractor jar to the build agent the first time it's required. However, if your build agent does not have access to the internet, the build will fail when attempting to download the file. You'll therefore need to download and install it manually.

To install the Gradle Extractor jar on an agent with no internet access:

For the build agent to be able to run conan builds, do the following:

Node.JS version 8 and above

The build agent requires using Node.JS version 8 and above. To check which version of Node.JS is running on the build agent:

To upgrade Node.JS on the build agent:

This section is relevant for you, if you're not using a public CA (Certificate Authority) to issue the SSL certificate used to connect to your Artifactory domain. You may not be using a public CA either because you're using self-signed certificates or you're running your own PKI services in-house (often by using a Microsoft CA).

Read more about this in the JFrog CLI documentation.

Make sure that the URL of the Artifactory instance does not end with a slash.

3. Place the file in the following location on the TFS machine: C:\Users\<username>\Documents\WindowsPowerShell

Make sure <username> matches the name of the user running TFS and the build agents.

When configuring the task, do the following: When configuring the task, do the following: Setting and Deleting Properties on Files in Artifactory For more information about managing properties in Artifactory, see Properties.

You can trigger the following builds.

The Artifactory Maven task allows triggering Maven builds, while resolving dependencies and deploying artifacts from and to Artifactory.

The task can also be configured to capture build-info and store the downloaded and uploaded artifacts as build dependencies and build artifacts. The captured build-info can be later published to Artifactory using the Artifactory Publish Build-Info task. You also have the option of filtering out some of the Maven artifacts that will be deployed to Artifactory. You do this by defining one or more include patterns. You can also define one or more exclude patterns. The patterns can include wildcards and should separated by a comma followed by a white-space as shown below. The Artifactory Gradle task allows triggering Gradle builds, while resolving dependencies and deploying artifacts from and to Artifactory.

The task can also be configured to capture build-info and store the downloaded and uploaded artifacts as build dependencies and build artifacts. The captured build-info can be later published to Artifactory using the Artifactory Publish Build-Info task. The Artifactory Npm task allows triggering npm builds, while resolving npm dependencies and deploying npm packages from and to Artifactory.

The task can be also configured to capture build-info and store the uploaded files as artifacts in it. The captured build-info can be later published to Artifactory using the Artifactory Publish Build-Info task. Recording all dependencies as part of the build-info

When running the Artifactory Pip task inside a Python environment, which already has some of the packages installed, the installed packages will not be included as part of the build-info, if they were not originally installed from Artifactory. A warning message will be added to the build log in this case.

How to include all packages in the build-info?

Running the task for the first time with the Disable local pip cache option checked, should re-download and install these packages, and they will therefore be included in the build-info. It is also recommended to run the command from inside a virtual environment. The Virtual environment setup command field allows this.

Behind the scenes, the task uses JFrog CLI as a wrapper for pip. JFrog CLI also includes a caching mechanism, which stores the details of the dependencies locally, making sure they are included in the build-info, even if they are already cached locally. Read more about this here.

Conan is a package manager for C and C++.

The tasks supports the config install, add remote, create and upload conan commands. In addition, it supports a custom option, allowing to configure the task to execute any conan command. The full documentation of cona is available at the conan web site. Pushing and Pulling Docker Images to and from Artifactory

The Artifactory Docker task allows pushing and pulling docker images to and from a docker repository in Artifactory. The task can be also configured to capture build-info for the pushed or pulled image. In addition to details about the build and the build environment, the build info includes the image layers as build dependencies and build artifacts. The task stores build info locally on the build agent. The stored build-info can be later published to Artifactory using the Artifactory Publish Build-Info task. Being able to look at the build which was published to Artifactory, and see all JIRA issues associated with it, is one of the most powerful capabilities of Artifactory when it comes to managing metadata about artifacts builds.

The Artifactory Collect Build Issues task collects the list of tracked project issues (for example, issues stored in JIRA or any other bug tracking systems, and adds these issues to the build-info. The issues are collected by reading the git commit messages from the local git log. Each commit message is matched against a pre-configured regular expression, which retrieves the issue ID and issue summary. The information required for collecting the issues is retrieved from a yaml configuration, which is set as part fo the task.

The yaml configuration can be either be stored as text as part of the task configuration, or stored in a file. The file can be saved in the source control, and fetched, together with the rest of the sources to the build agent. It can then be accesses and used by this task. When configuring the task, select your configured Artifactory service endpoints and specify whether you'd like to collect environment variables from the agent and add them to the build-info. After the build-info is published to Artifactory, it can be accessed from the Artifactory tab in the Build Results. To support the artifacts life-cycle, Artifactory supports promoting published builds from one repository to another.

The Artifactory Build Promotion task promotes a build, by either copying or moving the build artifacts and/or dependencies to a target repository.
This task can be added as part of a Build or Release pipeline.

Run these steps to configure the Artifactory Build Promotion task: 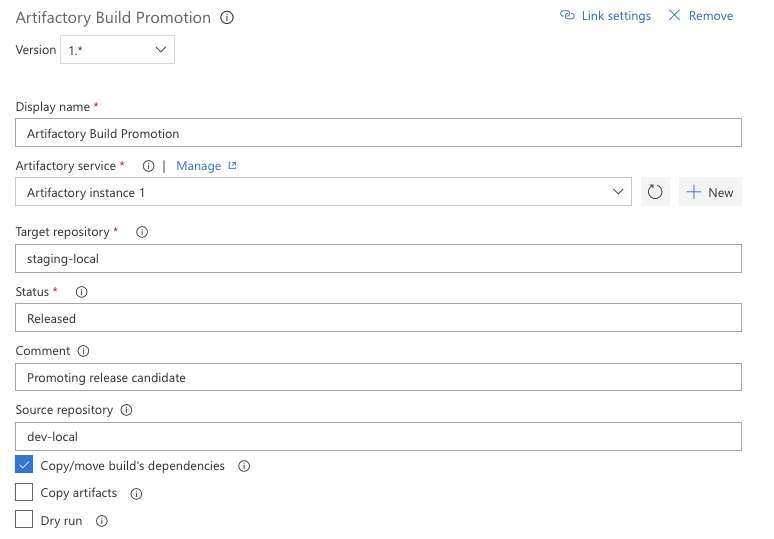 Using Build Promotion in a Release

You can control the life cycle of your artifacts by promoting them from one Artifactory repository to another. Build Promotion can come in handy when embedding it as part of release pipeline in Azure DevOps. To help you achieve this, follow these steps for creating a release which includes the Artifactory Build Promotion task.

If the Allow fail build task option is set and Xray is configured to fail the build, the build pipeline will fail, if vulnerabilities are found.

After the Xray scan is completed, the report can be accessed from the Artifactory tab in the Build Results.

Using Published Artifacts in a Release

Artifacts which were published to Artifactory can be made available for a Release Pipeline. There are two ways to achieve this.

The first way is to  use the Artifactory Download task to download the files during the release. Read more about this in the Downloading Generic Dependencies from Artifactory section.

Follow these steps to add Artifactory as an artifact source to a Release.

To discard old runs of a build from Artifactory, add the Artifactory Discard Builds to the pipeline.

Run these steps to configure the task. JFrog Distribution is a centralized platform that lets you provision software release distribution. It is a core part of JFrog Enterprise+, managing Release Bundles and their distribution processes, including release content, permission levels, and target destinations. Distribution provides a secure and structured platform to distribute release binaries to multiple remote locations and update them as new release versions are produced. As part of the release flow, release bundles are verified by the target destination to ensure that they are signed correctly and safe to use. The task supports commands with the jfrog rt prefix.